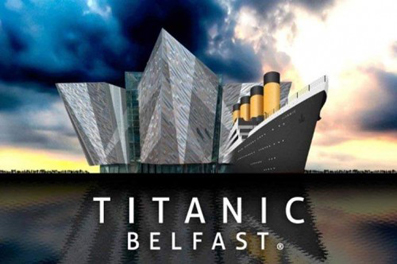 Titanic Belfast is a ‘must see’ on any trip to Belfast and has become the most popular tourist attraction in Northern Ireland and one of the top attractions in Ireland. Housed in an iconic, six-floor building, Titanic Belfast is located in the heart of Belfast, right beside the historic site of this world-famous ship’s construction.

The Titanic experience takes you through nine galleries, telling the story of RMS Titanic, from her conception in Belfast in the early 1900s, through her construction and launch, to her famous maiden voyage and tragic end. The galleries are innovative and interactive with many features including diving to the depth of the ocean to explore where RMS Titanic now rests. The Titanic story is told at Titanic Belfast in a fresh and insightful way. Visitors can now also experience three new galleries, which capture the excitement of launch day, as well as The Maiden Voyage gallery, which transports visitors from four embarkation ports, Belfast, Southampton, Cherbourg and Queenstown (now known as Cobh) to Titanic’s deck promenade. Guests can not only see and hear the ocean and feel the ships engines rumbling on board at the Palm Court Café but can also meet Fredrick Dent Ray, a dining room steward and survivor, utilising Disneyland’s technology. The Maiden Voyage gallery also includes an original first class luncheon menu dated April 14, 1912, as well as the last letter ever to be written on board the Titanic.

Details of times, prices and vistor information can found at https://www.titanicbelfast.com/Visitor-Info.aspx